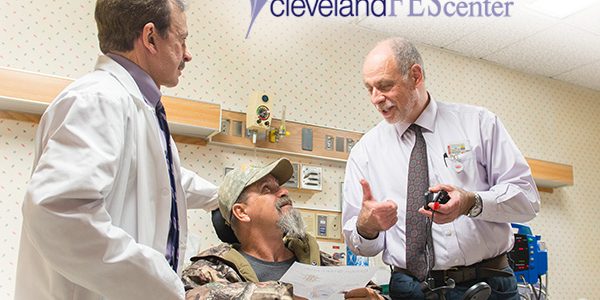 Anthony DiMarco, MD, Principal Investigator, and Krzysztof Kowalski, PhD, Co-Investigator, are among a team of researchers at the Cleveland FES Center that is combining two systems to offer complete restoration of respiratory muscle function to subjects with spinal cord injury (SCI). Results of an interventional clinical trial demonstrate that a spinal cord stimulation system to restore cough can be used safely and effectively in conjunction with a diaphragm pacing system to restore breathing.

Many individuals with SCI develop respiratory compromise and require mechanical ventilatory support. However, individuals with ventilator-dependent tetraplegia can often be offered an alternative method of ventilatory support through diaphragm pacing, which provides a more natural form of breathing. “We have also demonstrated that diaphragm pacing could be achieved via a less invasive method i.e. laparoscopically placed intramuscular diaphragm electrodes. This method has been successful in liberating thousands of individuals from mechanical ventilation,” says Dr. DiMarco.

A second system has been developed at MetroHealth Medical Center to restore an effective cough to individuals with SCI, thereby helping to reduce the risk of aspiration and the development of respiratory tract infections including pneumonia. “We developed the first method in the world by which we can activate expiratory muscles – abdominal and lower rib cage muscles, using minimally invasive techniques– to produce an effective cough,” says Dr. Kowalski. The initial system was implanted surgically, with disc electrodes placed on the dorsal surface of the spinal cord via laminectomy. Drs. DiMarco and Kowalski have subsequently developed a minimally invasive method using wire electrodes that are inserted percutaneously through needles, then advanced to the dorsal spinal cord under fluoroscopic guidance. Research subjects utilize a stimulator to produce several different cough efforts ranging from light to strong.

An interventional clinical trial conducted by the research team shows the efficacy of using the two systems in tandem. “Subjects can employ diaphragm pacing to restore breathing and also generate an effective cough by simply pushing a button. The project has been very rewarding. We see so many subjects who are very pleased with the system and have achieved significant clinical benefit.” says Dr. DiMarco.

Among those working alongside Drs. DiMarco and Kowalski at the Cleveland FES Center are Robert Geertman, MD, PhD; and Kutaiba Tabbaa, MD.

January 2019 Cover of the American Journal of Physical Medicine and Rehabilitation
January 14, 2019

Shining a light on the nervous system to thwart disease
June 1, 2018