Reorganizing the Brain After Stroke 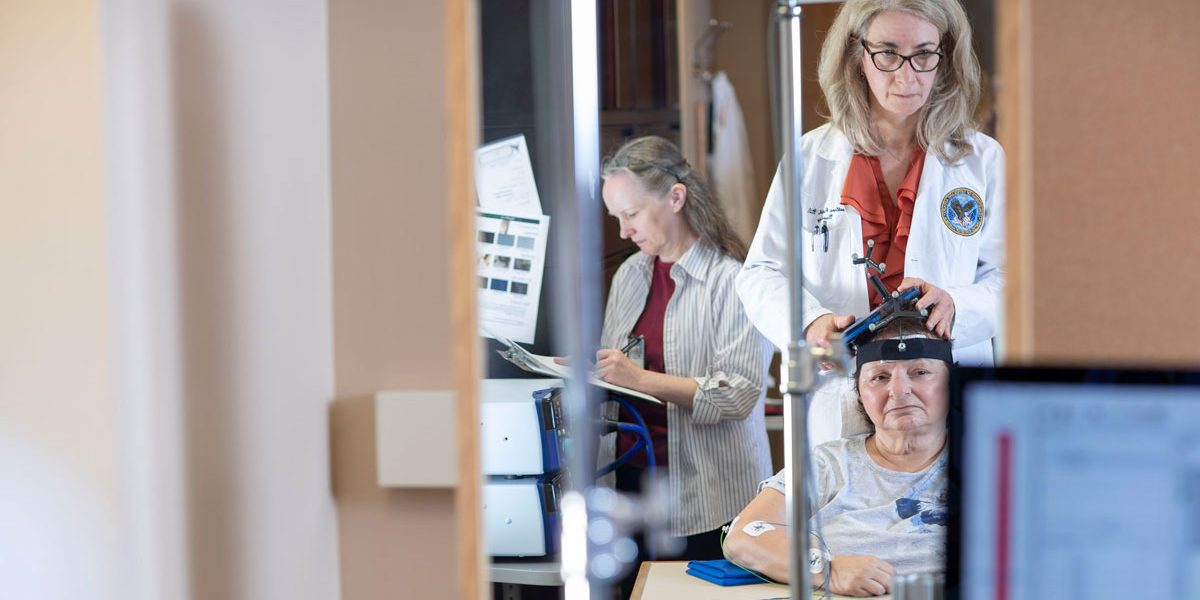 Robert Buckwald strides with purpose and determination into a therapy room at the FES Center’s Brain Plasticity and NeuroRehabilitation Lab in Cleveland.

He drags his left leg slightly, the lingering effects of a stroke. A brace wraps his left ankle and calf. He strides toward a chair, sits down assertively and without a hello or good morning says: “I’m ready to go faster and higher today.”

Buckwald volunteers in a randomized clinical trial in the Post-stroke Gait therapy program guided by FES investigator Svetlana Pundik, MD, MSc. The therapy uses noninvasive brain stimulation called transcranial direct current stimulation (tDCS) in hopes of generating new pathways for brain neurons, which would allow stroke survivors to regain partial or full use of limbs. tDCS sends a low current between electrodes placed on the surface of the scalp. Put in everyday terms, FES investigators are researching ways to use electricity to help stroke patients walk and use their hands again, a monumental step in recovery.

Pundik is one of several FES investigators focusing on neuroplasticity, the brain’s ability to change, grow and reorganize neural pathways and make new connections, in this case after stroke. The FES Center advances and propels the research of scientists, engineers and clinicians in the use of Functional Electric Stimulation (FES) to improve the life of those with neurological or other musculoskeletal impairments.

In the Gait program, Buckwald spends 15 minutes on a treadmill wearing devices on his head. Because this is a randomized control trial, the device may or may not be sending mild impulses into his brain. As he walks the treadmill, virtual reality presents him a wooded pathway on a large video screen in front of him, with his footsteps appearing on the path.

Objects are placed on the right side of the path, forcing Buckwald to lift his right leg and even “hold” it over the object. That action prompts him to rely on his stroke-affected left leg, which allows his nerves to regain function, perhaps in a manner different from the way they functioned before the stroke.

“The overall hope is that the research will lead to a better understanding of how people recover after stroke, and to develop better ways of helping people recover,” says Pundik, a stroke Neurologist, the Medical Director of the Stroke Program at the Louis Stokes Cleveland VA Medical Center, Director of the Brain Plasticity and NeuroRecovery Lab at FES Center and an Associate Professor of Neurology at CWRU School of Medicine..

The treadmill, which is just one part of Buckwald’s therapy regime, includes 34 “obstacles” and can move at varying speeds and inclines (Buckwald’s reference to “faster and higher). Fourteen cameras measure precise details of the use of the impaired foot. Among the measurements are ones for motion and force, including the torque on the affected foot and ankle – how much power it can generate and absorb. Participants can go through the “course” six times.

“Something is helping,” says Buckwald, who stays as active as he can, including cutting his lawn. “I know a lot of stuff is helping. The physical therapy is helping. The exercises are helping.”

Pundik’s research involves not only tDCS but also Transcranial Magnetic Stimulation (TMS) which uses a magnetic field to generate electrical currents in the brain. The technology already is being used to treat depression and Parkinson’s, though with Parkinson’s the treatment is via deep brain stimulation.

Pundik concedes the challenges in helping stroke survivors are significant. As FES investigator Ahlam Salameh, PhD says, “Stroke is sudden and life-changing (and) not a lot of people handle it well.” Pundik evaluates the neuroplastic brain changes through the use of functional MRIs (FMRI) and diffusion tensor imaging (DTI).

The work takes time, and demands patience, which Pundik sometimes lacks because her desire to help her patients is strong. While Parkinson’s and depression have a very consistent brain pathology, stroke injury is unique to each individual.

“So, it’s hard to find one treatment that fits everybody,” she says, “though we’re certainly trying to figure that out.”

A Hand in Daily Life

Jayme Knutson, PhD, another FES investigator focused on brain plasticity, uses CCFES – contralaterally controlled functional electrical stimulation – in his work at Cleveland’s MetroHealth Medical Center. He is an Associate Professor of Physical Medicine and Rehabilitation (PM&R) at CWRU and the Director of Research at the MetroHealth Center for Rehabilitation Research, and a Biomedical Engineer at the Louis Stokes Cleveland VA Medical Center. His focus is developing new therapies for stroke survivors who have lost hand function on one side of the body.

Knutson and his team put a glove on the good hand. The glove has sensors that can detect when the hand opens. That glove is connected to a stimulator on the affected arm. The team asks the research participant to open both hands.

“We still have a lot to learn about what’s happening in the brain, but it seems to respond to that,” Knutson says. “CCFES therapy seems to be sending signals back to the brain that are rewarding its attempt to open the hand.”

Neuroplasticity at work – over time and with therapy and repetition the work coaxes the brain to change the way it sends signals to the impaired hand that lead to better hand movement and function.

“We’ve done a number of studies in many of stroke survivors, and we’ve seen positive outcomes from those studies,” Knutson says. “It doesn’t mean that everybody in the study recovered normal hand function.

“But a majority of the people in the studies got an improvement in hand function that was significant, that made a difference for them, that helped them open their hand and use it more in their daily life.”

Knutson now is lead researcher on a multi-site study that is taking place in Atlanta (Emory University), New Jersey (The Kessler Foundation), Baltimore (Johns Hopkins) and Cleveland (MetroHealth) to see if other sites will see the same results. He also has developed a study with colleague and FES Investigator Michael Fu, PhD, that combines CCFES with custom-designed video games, which challenges patients to achieve better control of finger opening during their therapy. An Oberlin, Ohio, company is working on making CCFES commercially available for clinical use.

“When therapists see the CCFES device on a video or at a presentation, they immediately want it,” Knutson says. “And I think they want it because they recognize a tool that has potential.”

Salameh’s work is with a NIRS — Near Infrared Spectroscopy and Imagining — device that can measure brain oxygenation during activity or rest. The NIRS is a cap, commercially available, with infrared lights that can project a detailed picture of the brain’s neural activity. The cap fits tightly over the scalp, and resembles the caps worn by participants who appear in video games or in front of other green screens.

Salameh works in the Brain Plasticity and NeuroRehabilitation Laboratory at the VA and is part of the StrokeNet research project. She explains that activities require energy, and energy means bringing blood to the active tissue. Seeing that blood activity in the brain through the infrared sensors gives researchers a good picture of working pathways.

Her thinking relates to infancy and childhood, when the brain is in a developing state. As children learn to walk or interact, they become more adept at an action the more they do it. After stroke, the brain reverts to a similar state, she says. Repeated activity can re-teach the brain to sharpen.

The NIRS image combined with an EEG that measures deeper electrical brain activity provides a complete picture. In simple terms, NIRS shows blood flow, the EEG how the blood flow is being used.

“It’s not building new neurons, just re-directing how the neurons connect with each other,” she says. “Making new networks, and new communications between neurons.”

In her work with research participants who have lost hand or arm function, Salameh places a myoelectrically controlled device over the mid-arm, with slots for fingers. The device has a sensor that moves the fingers when it detects even the slightest electrical activity in the arm. Over time, the brain is taught how to move the hand and fingers again.

“What this is doing is actually reminding her that this is how it feels to use this muscle,” Salameh says. “She has the connection, it’s just that she’s forgotten how to use it.”

Therapy involves 18 sessions over a six-week period, 90 minutes per session. Salameh admits that’s a lot, but it’s important to take advantage of the time because research shows the most impactful recovery takes place between two days and six months after the stroke.

Salameh relayed a story of a research participant who when she started had trouble opening her hand and bending her elbow. After a few weeks, she was able to open her hand, close it around an object, move it, put it on a different table and pick it up and put it on another table.

In further describing her feelings, she sums up the attitude of all the FES investigators.

“It’s really nice because you see the individual as excited as when they took their first steps as a child all over again.”