FES Fosters Collaboration and Research in the Fight Against Pain 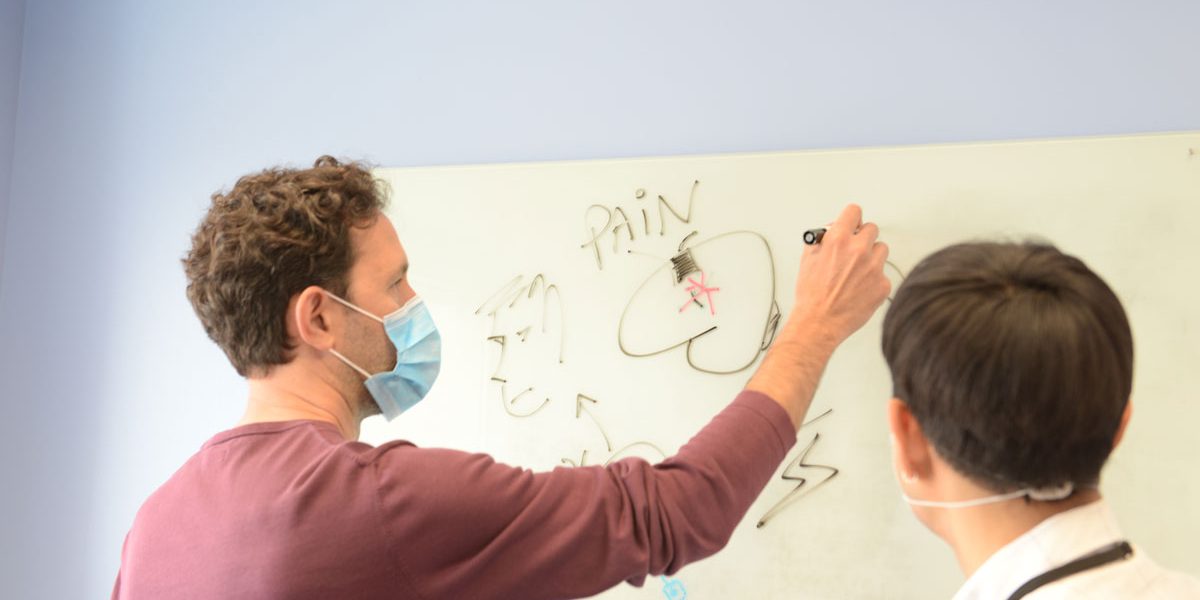 Melissa Riccio knew she was in dire circumstances late last summer when chronic pain in her left shoulder kept her from raising her arm to wash her hair.

“I could not lift that arm at all,” Riccio says.

Her story has a happy ending. Seven months removed from the start of a clinical trial conducted by Rich Wilson, MD, an investigator for the FES Center, Riccio is a new woman – with what feels like a new shoulder. Seven weeks of electrical stimulation provided transformative results.

“It’s wonderful,” Riccio says, adding that, yes, she again can wash – and condition – her hair on her own.

Riccio’s story illustrates the benefits of Wilson’s research into alleviating chronic shoulder pain via an FDA-approved electrode implanted under the skin. The electrode wire leaves the skin and extends a couple inches down the arm, where it is plugged into a stimulator about the size of a small remote control. That device provides electrical stimulation to the shoulder muscles six hours per day, for seven weeks.

“Our studies have shown that we can achieve long-term pain relief with this treatment,” Wilson says.

Researchers, engineers and clinicians collaborate to develop innovative solutions that improve the quality of life of individuals with neurological or other musculoskeletal impairments. Through the use of neurostimulation and neuromodulation research and applications, the Cleveland FES (Functional Electrical Stimulation) Center leads the translation of this technology into clinical deployment.

Riccio does not know how she hurt her shoulder. She just knows that reaching over the back seat of a car to get her purse or reaching for a cell phone in her back pocket caused pain. One day when she reached up to the edge of a hot tub, the pain was “excruciating.”

A family doctor sent her to therapy, but this was during COVID and Riccio lost her job — and with it her health insurance. She decided to see what she could do on her own, and went to Google for exercises. Wilson’s study showed up on one of her first searches. Riccio applied, was accepted and soon after agreed to the less-than-10-minute procedure to implant the electrode. She was barely aware of the stimulation sent into her muscles.

“There were times I actually had to stop and concentrate on it to see if I could still feel it,” she says.

In September, a few weeks into the stimulation and follow-up therapy, Riccio was on a boat headed for the Lake Erie islands when she reached and grabbed her cell  phone from her back pocket.

Would she recommend Wilson and the treatment to others?

Wilson’s is one approach to pain being conducted through the FES Center. He uses current to stimulate muscles to contract in a cyclical manner. Others investigate blocking nerve signals with an innovative direct current. Another studies neural pathways and circuits in the brain.

The collective hope is that one day they can see their efforts make a difference to the patients who deal with debilitating pain 24 hours a day, seven days a week.

Blocking a nerve to block pain

Tina Vrabec, PhD, an investigator for the FES Center, points to small silicon items resting on her desk, all less than one-half inch long and perhaps one-quarter inch wide. These cuffs are designed to hold a tiny electrode that can be attached to a specific nerve. When direct current is run through the electrode the firing of a nerve is blocked and chronic pain is relieved.

Developing that electrode is Vrabec’s work, and passion. “Anything that we can do that pushes people in the right direction is a win,” Vrabec says. “This is something that’s controllable. That doesn’t have any addiction issues. That’s what we’re striving for here.”

In Vrabec’s study, the level of block would be controlled by the patient via an external device. There would be instant on, a localized effect and blocks ranging from full to partial depending on the patient’s needs. Modulation, she says, would be easy.

Vrabec joined the research team with Kevin Kilgore, PhD and Niloy Bhadra, MD, PhD more than three years ago. Her focus on using electrodes to block pain is in the research stage. Vrabec is in pre-clinical trials researching different electrodes that range from fully implanted, through the skin (percutaneous) or externally on the skin.

“It’s easier to get FDA approval with an external device ,” she says. “The tradeoff of that is obviously your specificity goes to heck when you’re outside the body. If it is on the nerve, you know you are blocking that specific nerve. When the electrode is placed on the skin, it’s harder to target the exact location you want”

She plans to be in a clinical trial in the next few years in hopes of gaining FDA approval for her device. The goal: To provide doctors with a way to give patients a permanent solution to chronic pain, like lower back pain, migraines or any other of the debilitating pains that plague at least 100 million U.S. adults.

“We’re trying to develop less invasive solutions that we can move into clinical practice while simultaneously looking at more exotic electrodes that we can make,” she says. “Anything that we can do from a basic science point of view that moves the pain research forward.”

Is this work as revolutionary as it sounds?

“I think so,” Vrabec says, a laugh pushing through her mask. “My goal is to see people consider a device as a first option instead of starting directly with pharmaceuticals.”

Mapping pain circuits in the brain

In his 16 years as a professor at Brown University, the research conducted by Carl Saab, PhD, in Neurosurgery and Neuroscience led him to a question: How can I translate scientific discoveries to help patients and clinicians?

The FES Center and the Cleveland Clinic provided a possibility. The Clinic brought Saab, an FES investigator and a Neuroscientist, to Cleveland to be Director of the Pain STAR (Science Technology And Research) Lab, which fosters research and collaboration in diagnosing and finding novel methods to treat pain.

Saab admits there is a revolution taking place with our understanding of pain from a biological perspective, and feels he and the 28 members of the pain consortium he’s building at Cleveland Clinic have a special opportunity because research is showing that pain, especially chronic pain, has a brain element to it.

Saab says he believes that for fully effective treatments of pain, researchers and clinicians have to account for the way brain networks and circuits behave.

“To get there, we have to start asking questions about how networks behave and where these circuits are in the brain,” he says.

Saab says his work is about reducing chronic pain into a circuit composed of interconnected neural cells in the brain, which means asking questions that have not been asked before.

“If we don’t pause to build new tools and devices to probe these novel questions, we’re not going to be able to solve the chronic pain problem,” he says.

His lab uses Optogenetics – the use of light to control neurons with unprecedented precision– in pre-clinical trials to map neural pathways. His study has allowed him to hone in on a particular sensory circuit that misbehaves during pain, a circuit that acts on a subsecond level, he says.

Saab says his work could ultimately lead to objective diagnostics for pain, as well as effective relief from pain because clinicians could “let the brain data guide the treatment.” The goal would then be to build off one model and scale to address other neurological diseases. Perhaps mapping brain neurons could lead to treatment for psychiatric illnesses or other brain diseases, he says.

One of Saab’s core beliefs is that pain is a window to the unner mental state or the ‘mind’. That belief, he says, got him into his studies.

“What we’re doing hasn’t been done before,” he says. “It’s an experiment. So far, it’s doing well, so I’ll keep going, fingers crossed.”

Wilson is a 13 years into his research that uses stimulation to treat pain.

He is in the midst of a clinical trial that will run through 2023 to further his research and see how well the electrical stimulation works. Whether it is related to making the shoulder stronger or to changes in the nervous system. Whether it works better when combined with physical therapy. And which specific patients can benefit.

“In the recent past, there’s been this idea that chronic pain may come less from the shoulder, what’s happening there, and more be a problem from the brain or spinal cord,” he says. “We really need to change focus of how we’re intervening on this problem to try to find an effective solution.”

The stimulation for the implanted electrode is barely noticeable to the patient. They can go about their normal activities as stimulation takes place – read a book, cook dinner, take a walk, watch a movie. After eight weeks the electrode is removed.

Wilson’s research mentor and FES Center Investigator, John Chae, MD, Department Chair of Physical Medicine and Rehabilitation and Vice President of Research at MetroHealth, brought the idea forward decades ago when he realized that electrical stimulation on the skin was painful because it was stimulating nerve ends. He emphasized a more focused approach avoiding those pain receptors.

“I find this really rewarding,” says Wilson, the Vice Chair and Division Director of Neurological Rehabilitation at MetroHealth and an Associate Professor at Case Western Reserve. “I think it’s interesting to see people get better. It doesn’t follow standard medicine, but it’s coming up with a new treatment that will really be able to be used worldwide.”

The next step would be to take the treatment to multiple institutions to measure their success rate. If the trend continues, Wilson feels he is on the cusp of a revolutionary treatment for people who have dealt with pain for so long that they have almost run out of options.

Wilson recently applied for a grant from the NIH to use this process to review lower back pain. He hopes one day to apply it to knee pain, from arthritis, or, after surgery, or to deal with phantom limb pain following amputation. He also wants to focus on combining stimulation with exercise therapy to see if that can provide more effective and permanent relief.

When his work is complete, Saab plans to provide the FES center with his data.

“(FES) provides a tight collaboration,” Saab says. “Once I understand the circuit, I’m going to give that circuit to FES and say, ‘Here’s the circuit. Here’s the challenge. Hack it.’”

Saab succinctly sums up what FES does and provides to the nervous system. The center shares information among investigators who may be at different stages of research in hopes of propelling that work forward.

“I’ve been part of the FES Center for more than a decade,” Wilson says. “It’s part of a collaboration between institutions and it fosters working together to achieve goals. It gives us access to different resources to really make us all more successful in our research. And I believe it also helps us bring products to market that would otherwise not be there.”

Saab is early in groundbreaking research. Vrabec is headed toward clinical trials. Wilson conducts clinical trials. FES provides the fulcrum where research within the field of neurostimulation, in this case to alleviate pain, can be shared, where communication can be fostered so science and skills can coalesce.

“Science,” Saab says, “is not just about one person sitting in the corner thinking, ‘I have a brilliant idea.’ You need to bring people together.”