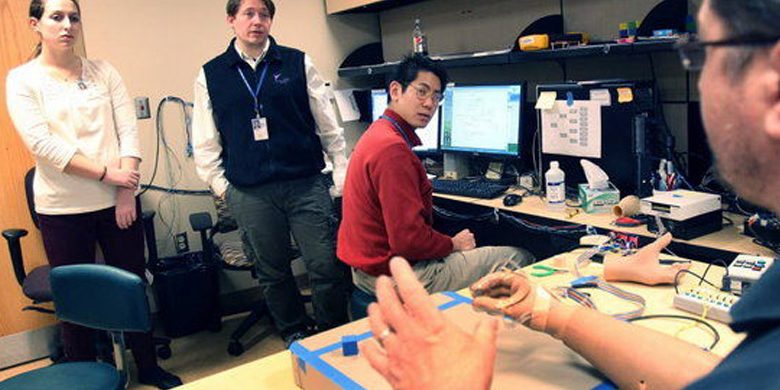 CLEVELAND, Ohio– Plucking the stem off a fat, juicy cherry may seem like a simple task, but it’s practically Herculean for an artificial hand—that’s because the prosthetic limbs,while much more dexterous and sophisticated than ever before, still can’t feel the cherry. The end result is a lot of squished fruit.

But researchers at Case Western Reserve University and the Louis Stokes Cleveland VA Medical Center are working on a potential solution: an artificial hand that provides sensory feedback to its wearer.

It’ll be a while before the model is ready for in-home patient use, but in early lab tests, the results are dramatic—cherry destruction dropped from about 60 percent without the feedback, to only 7 percent with feedback.

Restoring a sense of touch to amputees is key to making a more naturally functioning prosthetic limb, said the project’s director, Dustin Tyler, who has joint appointments at Case and the VA.