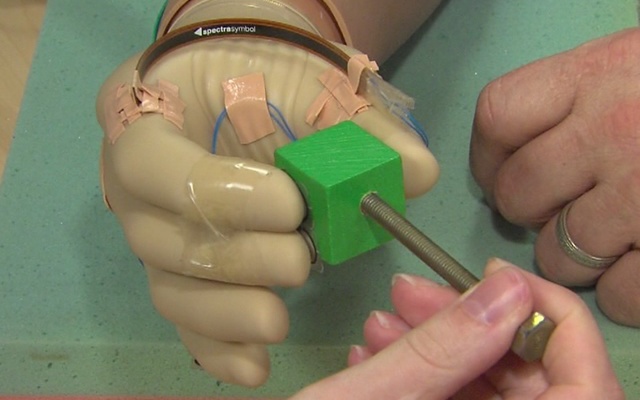 Igor Spetic was blindfolded in the test as he moved his prosthetic hand across a table as he attempted to pick up cubes about the size of walnuts. But he could not feel the cubes because he was working with the artificial hand to which he had been fitted. However, when engineers turned on a small power source, his prosthetic fingers came to life. Although blindfolded, Spetic felt every cube and worked the fingers on the prosthesis to grab each one and set it aside.

It was a huge medical and engineering accomplishment which took place in the Louis Stokes Cleveland Veterans Administration Medical Center, where Spetic is a client working with biomedical engineers who developed the hand. The hand is wired into his arm where more wires are attached to his nerves. When a small electrical power is turned on, Spetic mentally commands his fingers to grasp, hold, or pick up an object. In addition, Spetic actually “feels” the touch of his prosthetic fingers.

Watch the video on Newsnet5.com